Sunchokes - Harvest and a Recipe 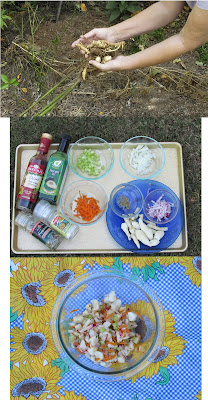 Well I decided to harvest some of the sunchokes to see how they did.  I have links to the earlier blog posts on this new garden addition.  I planted on February 19, 2012, in 3 different areas to see what worked or did not work.  Low water inground, more water, but less sun inground, and in a pot with more water and a lot of sun.

On Friday October 12, 2012 I harvest from the lowest water area, and pulled up about 2 cups unpared.  I did not clean them right away and that may have been a mistake, because I wanted to leave the peel on for the recipe I intended, but could not get all the soil debris off, so I wound up peeling them winding up with about 1 cup + of diced, raw tuber.

I am pretty pleased with this result.  In this patch I planted about 6-8 tubers initially.  In the other inground area I planted only 1.  That is the place with a little less sun, but more water and the plants are easily 50% taller than the area I just harvested in, so it will be interesting to see how that patch does when I harvest later in November.

Typically the culture calls for letting the plants die back to harvest and literally 'storing' unharvested tubers in the ground, but I had a strong desire to see how they were doing since the plants seemed very happy.

First here is the recipe, then more about my culture practice for this experiment and then links to the prior blogs on the Jerusalem Artichokes aka Sunchokes.

Raw SunChoke Salad
I was looking for a type of potato salad, although I have to say it wound up looking and tasting a bit more like a cole slaw.  (My family background is more of the oil/vinegar type dressing than mayo.)

1 cup+ diced sunchoke
1-2 tablespoons each radish,onion, celery and carrot
1/2 teaspoon dried oregano (I could have used fresh but just decided the dried would mix a little better for the taste I was looking for
1 teaspoon red wine vinegar
3 teaspoons avocado oil (I chose this oil for its lighter taste - you could use olive oil)
3 turns of the black pepper grinder
1/4 scant teaspoon salt.

Shake the vinegar, oil, salt and pepper to mix.  Sprinkle the oregano over the sunchokes, stir, add rest of veggies, pour over the dressings, toss and chill for about an hour.

We were very pleased with the taste and nice crunch of everything.

A bit of history.  I have not really paid much attention to the growing of the sunchokes, but last year I was reading more on them and thought if I had the chance I would 1) taste one and see what I thought, and 2) if I liked the taste I would try to grow them.  Well I was in Whole Foods in January, found them for sale and decided to go for it.  I tried them raw and cooked up like a potato and Deane and I both liked them.  I also like the nutrient and other good-food info on them.  Since sunflowers in general really love the gardens here I thought why not?

1st Location - Pot
This single tuber just about jumped out of the ground and pot, quickly out performing in above ground growth the other 2 locations.  I have not harvested this one because during the summer I had to move the pot, discovered the roots had grown through the bottom into the soil and anchored.  Moving the pot, killed the above ground growth.  Meanwhile a lime basil plant and decided it was delireously happy in the pot, so I have not checked the tuber growth yet AND the sunchoke is resprouting.  Later when the basil goes down I will dig up and see what I have.  This pot was pretty much in full sun all day, and watered every 2 days for 10 minutes all summer, spring and now in fall every 3 days.

2nd Location - Inground
This was the location I wanted to really see how it would grow.  This patch is in sun pretty much all day, with tree watering cycle -- every 7 days except for summer when it is every 6 days.  Initially these tubers were stressed quite a bit, wilting 1 or 2 days before the next watering cycle, but I was really interested in whether they would adapt and they did very well.  This was the patch I harvested the batch Friday for the recipe test.  These plants reached about 6-7 feet tall.  There are still quite a few stalks here, so it will be interesting when I harvest in November to see what the final production will be.

3rd Location - Inground
This is in a section we call the Meadow because it is between 2 deciduous trees with a Navel south of it.  It gets between 4 and 8 hours of sun a day depending on the time of year.  These plants are now 9-10 feet tall and all from a single tuber.  This is watered every 4 days during the summer, now every 5 days and in the winter may go back to every 6-7 days.  Because of the size of the stalks, I anticipate this harvest to be pretty good.

Conclusions:
I am really pleased with my experiment.  I wanted the 'tree-watering -- #2' location to really perform well because it is also an area where I can attempt to control spread more easily.  One of my challenges is I frequently let plants go where they want and then regret later.  Also since this is an area that is watered regardless of what is planted there, it involves no additional maintenance and upkeep.

I was also happy to see how abundantly the top growth performed in a pot -- I need a larger pot for future production though because the top growth became a weight issue early on causing the pot to lean or try to fall over.  But overall the sunchokes can be grown in a large container and that is a good piece of information for those concerned about this plants invasive reputation.

I am planning on always having some growing.  I also plan on harvesting primarily twice a year -- fall and spring.  I will post more on how all this plan works out :-)


Prior Blog Posts on Sunchokes

Have a great day in the garden,