Around the garden and Seed Swap Coming Up! & Monsanto At It Again! 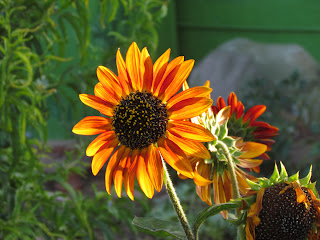 Been busy with I can't even tell you what - just stuff - but I did get some pictures of happenings in and from the garden.

One evening as the sun was moving behind the fence and plants Deane caught one of our sunflowers backlit, giving it an almost neon glow - it was lovely.

On June 6th I harvested our purple potatoes and some pickling cucumbers.  I was a little later than I should have been for harvesting the potatoes, but got a nice crop.  Immediately made potato salad with wonderful eggs from "The Funny Farm" one of the farmers at the Mesa Farmers Market.  With the purple 'taters and deep orange of the eggs, this was a great salad. 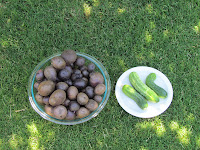 Seed Swap July 6th, 9 a.m. to Noon at the Mesa Farmers Market, located south of University on Center on the east side grass area.

If you do not have any seed to swap, come anyway.  FREE!  I will be doing an ad hoc Q&A to help folks pick out seed and learn about sowing in the summer for fall crops. 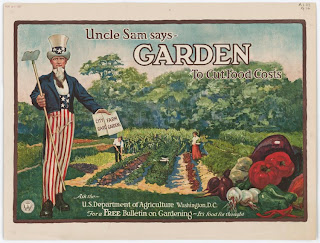 To get your thinking - I've added these two posters.  I think they say a lot.  One the government used to encourage people to grow some or all of their own food.  And you have probably seen the reference to the fact that 40% of produce grown during WWII in the US was from backyard gardens.  To be sure, the government did all this encouragement during the first to world wars to send more food to troops and overseas, but the bottom line is it gave citizens control over a lot of their food choices. 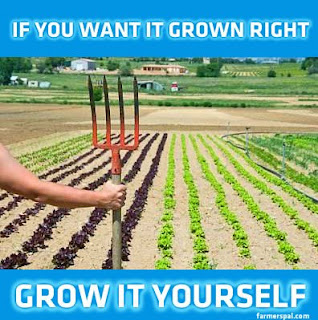 The second poster is about the government paying more attention to what the big ag businesses and chemical companies want rather than what individual citizens want.  We want choices based on accurate and reliable information, not the FDA or USDA telling it is 'deemed' safe.

Two things on the political scene one just happened and the other is about to happen.  Recently the Senate considered amendments to the "farm bill" - one such amendment would have permitted states to require the labeling of GMOs and a State's right to pass such legislation.  Our two Senators Kyle and McCain voted against that amendment.  There were a lot of other things in the overall bill which had a lot of people worried, but to me the right to know was just voted down.  I am keeping my fingers crossed that the California Ballot to mandate GMO labeling passes and starts the ball rolling for other states to have similar laws.

The next up in the House is the FY 2013 Agriculture Appropriations Bill in which a sly Section 733 (deceptively called the "Farmers Assurance Provision") has been tucked into the language which in essence allows GMO crops and plants to be planted with a waiver of rights to restraining orders, meaning XXX ag business with Monsanto's assistance can get a waiver from the government to go ahead and plant 'while' the challenge is being considered, and would deny anyone, group, or community from getting restraining orders. Representative Peter DeFazio (D-Oregano) has introduced a 'strike' to that section, but other representatives have to agree.

I would urge you to get in touch with your representatives to get them to support DeFazio in this.  Our Senators caved to Monsanto, let's see if our Representatives can actually stand up for our right to be able to block GMO bullying.

Temperatures - just a reminder as we move into the summer humidity and heat, watch your watering requirements.  You can actually overwater as the humidity rises (less evaporation) and we have (hopefully) a lot of rain.  Also, you plants may suffer chlorisis from the extra water necessary at this time of year.  Evidence is yellowing leaves where the green veins stand out.  Correct with green sand or ironite applied to the surface areas before watering and the problem will resolve in about 2 weeks after application.