Around the Garden, Squirrel! and Some Greening News 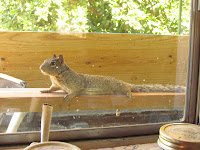 The concept for our gardens is a mix of control and random happenstance, meaning something we intentionally arrange, and other things just happen. Then there is the issue of the critters - squirrel!  (Love that distracted mind reference from the movie "Up" - fits my current age.)  It also fits one of our newest visitors a squirrel that has adopted two old softies.  After spending a good portion of some years humanely relocating the rock squirrels from the gardens down to lakeside, last year Deane secured the sheds from damage by putting in a paver floor.  At the same time a squirrel decided to dig a burrow under the apple tree.  I tried several times to discourage said squirrel, but the reality was the burrow did no damage to the tree, the squirrel was not doing any appreciable damage to the garden, and was occasionally amusing to watch, so we decided to take a wait and see and a live and let live approach to said squirrel. Then she adopted us because she was eating fallen fruit and we put seed out for the birds and the next thing I'm doing is tossing out the occasional peanut - and viola we have a squirrel who has pet humans.  She is nursing young and has taken to tapping on the kitchen window to get our attention.  Sigh.  We are still watching to make sure there is no damage which is too destructive to let be, and she has developed so many funny habits we are hooked. 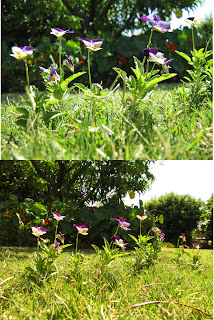 For those of you who do not know about this 'eastern grey squirrel' look-a-like -they burrow and do not live in trees although they can climb them just fine.  They can be particularly destructive to residential gardens because of the burrowing.  In our case the damage was general the problem of them getting into the sheds and making nests in things like Deane's back up "Turn-Out-Boots" -- special boots firemen use.  Now that the pavers secure the sheds and the fact that squirrels, unlike birds, eat one whole thing and do not take a nibble here and a nibble there, we figure we can live with "Squirrel" - at least for the time being

My Johnny Jump Up Forest - seen from a bug's eye view.  Last year when some violas and JJU volunteered in the lawn I thought it would be fun to put some seeds in the lawn and hope for a flush of flowers this year.  They took a while to get going as we do not do a winter lawn but once they sprouted it was fun to watch and wait for the flowers to come out.  Looking at them from the top and across I thought it would be cool to see them at bug/grass level so Deane accommodated that with his great camera skills.  The lower picture is a long view of the garden trees across the lawn.  Perspective is an interesting tool in photography - the depth behind the flowers is actually only about 18 feet or so :-) 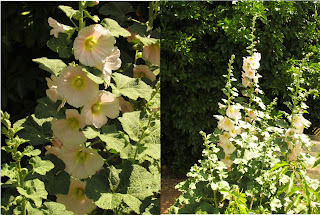 Hollyhocks are always fun to grow.  With this lovely volunteer we just let it go.  This is actually going into its second year.  When you cut the finished flower stalk down here in the desert you may get not only another bloom later on but a bigger plant!  This was taken April 29th and is over 6 feet tall.

GMO Labeling is on the California Ballot.  After collecting almost twice the number of signatures to get this initiative on the November 2012 ballot, Californians will be the first state since Oregon tried it 10 years ago to have mandatory GMO labeling.  Two links below:  First one explains the ballot measure, and the second one is from the Farm-To-Consumer Defense Fund - collecting donations to mount the support of the ballot measure and counter what is expected to be a full on battle with the money from the I\industrial food giants and Monsanto among others.  Give a read and support if you care to.  If Californians are successful or even if they are not, hopefully other groups in states will get similar measures on the ballot.

Other news of a Greening/Environmental note is Vermont is set to become the first state to ban FRACKING.

You may wish to do your own research on the issue of fracking - using chemicals and water to help extract oil and gas - among concerns is the real link to mini-earthquakes in regions known to be earthquake susceptible (a well as other possible areas) and the use of potential ground-water-contaminating chemicals..

The government is set to enact a set of rules that would greatly reduce some of the earlier safe guards considered.  Among other things the companies would only have to disclose the chemicals used AFTER they completed drilling - like closing the barn door after the horse is out.  I personally detest regulations that aim to subvert adequate warnings and safeguards by allowing someone (or whole communities) to sue only after they have had life-changing damage - this is just wrong.

I'm getting real tired of all these people who want to put regulations which do more harm than good on peoples choices particular when it comes to growing and raising your own food, and THEN at the same time set up situations in other food and life realms where you have to wait until you have been severely damaged to show there should have been warnings -- I do not mean to putting reminders on curling irons that they are hot!  Geesh!

Be kind to yourselves folks and start, or add to, growing your own food, I think we may need it more than most people know, and, sooner than later!