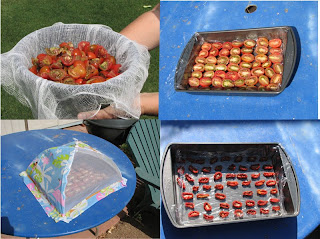 The tomato plant and all its varieties are a non-climbing vine member of the Solano (nightshade) family which fall into two categories: determinate and indeterminate.

(Photos show how to sun-dry your tomatoes - see recipe below.)

Tomatoes, like their eggplant and pepper cousins are tender perennials, meaning with frost protection in areas like the desert they will live for several years — they don't produce during the winter, but the larger root system gives them a jump-start in the spring growing season, a benefit because while our spring growing season for tomatoes is too short for beefsteak-type tomatoes, it is sufficient for salad and cherry, pear or grape size varieties — and we get a bonus of a fall production beginning in late summer and lasting through frost.

Determinate type tends to be more bushy and compact, usually called patio-type because they do well in large containers.

Indeterminate types can reach 18 or even more feet in overall length and are the usual tomatoes planted because they are more productive over a longer growing season.

The customary plant guide for growing indeterminate types says to stake or cage them and that works everywhere except in the desert garden — in our desert gardens we let them sprawl for maximum production. Also the fruit tends to be better hidden from birds.

We garden ‘experts' have been writing about this practice for a while now and I can tell you from first hand experience it is the absolute best way to grow tomatoes in the desert.

Here is the reason and my ‘testimonial' — consider that in our summer the air is generally hot and dry (I know, I know — an understatement) and if you consider that fact when you stake or cage your tomato plants you are bringing them up into the hotter, drier air, away from the cooler, moister air of the soil. In addition the sprawling vines provide a canopy to the soil, retaining the moisture better and longer and therefore mulching is not generally necessary.

I have been growing an heirloom black cherry plum (really more of a grape-shape) tomato for several years — it freely re-seeds each year and we let it because of the wonderful flavor and bounty of this little gem - growing like a cluster of grapes these mahogany, rich flavored tomatoes, fruit well into the end of July if allowed to sprawl (as mentioned above, we get a second crop beginning in late summer/early fall).

Last year I wanted to put some additional plants in near one of my volunteers so I caged the plant to provide sun to the others plants — that plant was limited in growth, and gave us little fruit, while the sprawling plants in other areas of the garden gave us bushels of tomatoes — I had enough to even sun-dry some for later use.

The vines on these plants are pretty sturdy and robust and generally the small fruit does not touch the ground. If fruit does rest on the ground while ripening, just slip an unwaxed plain, white paper plate under them until ready to harvest.

Compost Tip: Toss the plate into the compost pile when you are finished with it — white untreated paper products like plates and paper towels can be composted AS LONG as there is no grease or meat products on it).

Ripening Tip: Use paper plates in the same way with any fruit such as melons, squash or cucumbers, which may rest on the ground - keeps the bugs away from them, and they don't get damaged or rot.

Some final thoughts on growing tomatoes:

1) never water from above - tomato leaves tend to pick up soil born diseases when watered from above — also watering from above may contribute to blossom-end rot on the fruit.

2) if anyone in the household smokes — don't let them touch your tomatoes — there are reports of tobacco-born disease transmitted to the tomato plants by smokers handling the foliage.

3) consider a light covering of bird netting over the plants to keep both the birds AND the sphinx moth off the plants. The birds are after the fruit (birds don't usually bother the green or yellow fruiting types of tomatoes such as green zebra or yellow pear). The sphinx moth lays the eggs which hatch into the tomato hornworm. Since the sphinx moth is also one of our pollinators I would rather she go lay her eggs on some other plants - even an intentionally unprotected tomato plant - than on my primary producing areas. I discovered the bird netting/sphinx moth relief one year when we covered the plants to keep the birds off the fruit and had NO horn worm problems that year - the moth is so big she can't get through the netting.

4) save some of the harvested, ripe fruit and allow to dry and collect seed for re-seeding where you want the plants next season.

5) sow seeds indoors in December or June for planting out 2 months later.

6) if you don't want to or can't use bird netting, hang metallic red Christmas balls here and there in the tomato vine BEFORE the fruit on the plant begins to color - the birds will tap the metal, and learn it isn't edible and may leave most of the later ripe red tomatoes for you.

7) if you or a family member have a problem with the acid content of tomatoes, try growing the white or yellow varieties — they are far lower in acid than their red cousins. The yellow pear is a prolific producer of sweet tasting fruit — children love them and they are great anywhere, anytime.

Bird Tip: Although some birds have a taste for tomatoes, usually they are after the fruit for moisture. Give them a water dish keep cleaned and filled AWAY from the garden area.

One of the most loved and good for you fruits, tomatoes should and can be in everyone's garden!

I mentioned beefsteak tomato above — did you know there is another "beefsteak" — it is referred to in Japanese cooking as "beefsteak leaves" and the first time I heard that I said to myself ‘I don't think so" since the nightshade leaves are poisonous. Turns out the chefs were referring to Perilla Frutescens "Shiso" another member of the huge mint family, it grows and is used much like Basil, with all parts edible. Available in a purple or green leaf color, the flavor is variously described as spicy, cinnamon and/or minty. The seeds and plants are becoming more readily available in the US. Like basil it is also a tender perennial (frost sensitive).

Check out Richters out of Canada - one of the largest herb suppliers in North America - they have an incredible selection of seeds and plants BUT, because of our opposite growing climate it is best to order seeds from them — there is a limited window in spring (May) and fall (October) where plants will survive OUR temps during transit. Their customer service is super!

Sun Dried Tomatoes are easy in the desert! Just wait until we are in the 100 degree days. It is a good idea to have some kind of a screen which will fit over the trays holding the tomatoes to keep flies etc. off them while they are drying. Even with that kind of heat it takes 2-5 days for the tomatoes to completely dry depending on humidity levels— they must have all the moisture dried from them to allow you to store them in the pantry.

Line a cookie sheet or large cake pan with plastic wrap — NO aluminum. Select perfectly ripe, unblemished fruit, rinse and dry, and cut in half lengthwise. Snug up the halves, cut side up, in a single layer, filling the tray (they will eventually be reduced in size by 2/3rds or better). Place in full sun with the screen cover. Bring inside each evening (so they do not reabsorb nighttime moisture) until completely dried out — they should be ‘leathery' — store in sterile glass jars in the pantry. Can also be stored in air-tight containers in the freezer.

Make your own sun-dried tomato anything! For an upcoming salad or pasta, select only as many as you will use for the salad a day or two ahead of time and place in glass jar and cover with olive oil — Reconstitute in water or wine for tossing with pasta, or baking in bread. Slice dried tomatoes into strips for adding to pesto/cheese-topped toasted bread for an appetizer.

For more recipes, check out my newsletter from October 2005, where I shared a tomato water and other tomato recipes.