Let me tell you the story of the Bradford Watermelon Scar. 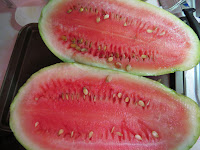 If you have been reading my posts for a while, you know I planted and have harvested a couple of Bradford Watermelons, and heirloom "discovered" several years ago growing in the backyard of the original grower's heirs.

To say this watermelon variety is worth every effort to grow it, is an understatement. The fruit, even under-ripe is incredibly sweet -- all the way through the white rind -- just amazing.  (You can use the white rind as you would a cucumber.)

Pictured is the comparison of the scar when we first discovered the damage and after harvesting the fruit.  Don't let the ugly appearance of the scar fool you, it is the same kind of damage branches rubbing on a growing fruit produces.  The fruit 'sealed' and 'healed' -- this is the story.  For the purpose of this collage, I flipped the harvest scar to show you the orientation.  The scar never changed - never got worse, only grew in proportion to the growing fruit.

You can read the my other posts here on my growing adventures.

Second harvest and I dropped it!

So on to the last Bradford Watermelon harvest of the year, November 27th we noticed the vine had suddenly collapsed. Time to harvest the remaining viable watermelon. 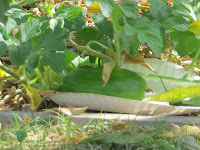 This one had a special place in my garden journey.  After discovering the fruit under some vine on October 12th, I placed a paper plate under it to protect from the soil-born bacteria which can rot the fruit. 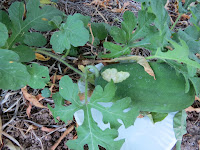 4 days later we spotted damage to the fruit by a squirrel.  The little stinker had shown up rather suddenly and contemporaneously discovered our fruit!

We discussed the 'nature' of the damage and determined it was literally only skin deep, so I decided to let it continue growing - now with a chicken wire hat to protect it, and it worked perfectly.  (Check out my youtube channel for a couple of short videos on using chicken wire hats.) 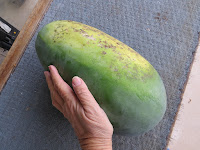 When we notice the vine had collapsed on November 27th I harvested the last melon, the one with the scar.  Pictured you can see how much it had grown.

In the early pictures I was amazed at just how fast it was growing.  The first picture showing when we discovered the fruit and I slipped a paper plate under it, for ratios the plate is 9 inches wide, and the fruit is about 7 inches long.  4 days later the fruit was as long as the width of the plate. 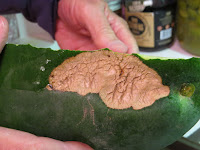 When I harvested it using my hand and the subsequent baking tray I have the cut melon on, the fruit had reached about 15 inches long.

After I started cutting the melon I remembered the scar and took a photo to illustrate the original work of the squirrel and not invaded the fruit and merely remained a scar on the outside.  Not pictured clearly is that the scar thickened outside not inside the skin. 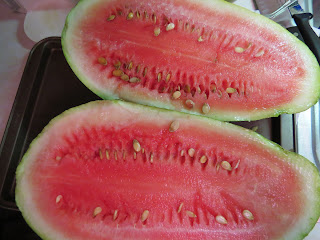 So really ugly scar amazingly delicious fruit, even slightly under-ripe.  It could have probably gone another couple of weeks, but I did not want to chance it since the vine had collapsed.

I will have seeds from the earlier and possibly this fruit in my seedbank.

Have a great weekend in the garden and kitchen!

Disclaimer: Clicking on links on this blog may earn me a small commission if you purchase something. Your price does not change.

Posted by Catherine, The Herb Lady at 7:31 AM No comments: Links to this post

Continuing my re-posting of my 25 days celebrating herbs mentioned in the bible, here are days 7, 8, 9 & 10 featuring:

Celebrating the Multicultural festivities of December, I thought I would pick an herb or spice which is referenced in the Bible (land of three of the Major Religions of the world) and used in many cuisines around the entire world, as a way of gathering together all the wealth of diversity around us - in true celebration.

A note about the herbs and spices I selected. There is agreement on some of the herbs (garlic, onion and mint for example) and some continuing discussion on which plant the Bible referred to.  After many years there is a consensus - although still discussed by some - that the Hyssop of the Bible is Syrian Oregano (Origanum maru).  Since Hyssop (Hyssopus officionalis) is not indigenous to the lands of the BIble but Syrian Oregano is, I have included it as the Biblical plant.

The Bible does not specifically name Dandelion, but it is presumed to be one of the bitter herbs.  As often happens with historic writings, we can make some better than a guess about what constituted - in this and other instances - the "Bitter Herbs."  However, the dandelion is not only a probable Biblical plant considered as one of the "bitter herbs," but for centuries around the world this herb has been valued for food. -- Herbs of the Bible  By Allan A. Swenson

I am sure I was one of millions of children who plucked the bright yellow flowers to bring a bouquet to their mothers, or blew the delicate seed head and watch them float away.  A lawn-purist's nightmare, the Dandelion is again coming back to appreciation for all of its great culinary uses, and the pollinators love them too.

Dandelions are found on all continents and have been gathered for food since prehistory, but the varieties cultivated for consumption are mainly native to Eurasia.  -- wikipedia

The entire Dandelion plant is edible, known for its tonic properties and digestive aid.  The roots are roasted to make a caffeine-free coffee substitute.  The flower petals used to make a spring Dandelion Wine.  The leaves and flower buds are blanched or sauteed like spinach, or used raw in salads.

More of the Farmers Markets are carrying Dandelion greens along with other ancient lessor-known greens and vegetables.

Bodhi Day is the Buddhist holiday that commemorates the day that the historical Buddha, Siddhartha Gautauma (Shakyamuni), experienced  enlightenment.

Services and traditions vary amongst Buddhist sects, but all such services commemorate the Buddha's achievement of Nirvana, and what this means for Buddhism toda.  Individuals may choose to commemorate the event through additional meditation, study of the Dharma, chanting of Buddhist texts (sutras), or performing kind acts towards other beings. Some Buddhists celebrate with a traditional meal of tea, cake, and readings.

Food:  Like many wild plants younger leaves can be eaten in salads or at a pot herb.

The roots can be eaten raw or boiled and buttered or par-boiled and roasted. The young shoots in spring can be cut down to the root and boiled and buttered. The spiny bracts on the flower head were eaten in the past like globe artichoke, and the stems (after peeling) can be soaked overnight to remove bitterness and then stewed. The leaves can be trimmed of prickles and boiled and make a good spinach substitute or they can also be added raw to salads. - Wikipedia.

Sow thistles got their name because they were fed to lactating pigs. (Remember the old heuristic way of thinking? If you want to see like a hawk eat hawk eyes. If you want mama pigs to nurse better feed them plants with white sap.)  This site has some recipes to cook with sow thistle.   http://www.eattheweeds.com/sonchus-sow-thistle-in-a-pigs-eye-2/

Horseradish, like other bitter herbs, is not specifically mentioned in the Bible, but in modern times is used as a component of them.

Probably native to Southeast Europe and Western Asia, it is naturalized around the world, and what a good thing that is, for its wonderful additions to flavor and spicy up our food.

Planting and Harvesting:  Horseradish can be grown in our desert gardens, but the planting and harvest times are reversed.  It took me a couple of seasons to get this figured out.  Plant in the fall to late Winter and harvest in late spring/early June.  It takes a couple of years to get to a good enough size root to harvest, but you can use some of the peppery leaves anytime they are lush.  Just don't harvest too many - you want the leaves to feed those roots!  Leave some roots in the ground for next years growth.   Pictured is my plant this September, lush and green, and a harvest several years ago in June.  Note:  The roots won't grow as huge as you may find in the grocery store, but they are just as good tasting.

Day 10
Sorrel Rumex (Polygonaceae (Buckwheat) Family) one of the herbs recognized as a Bitter Herb of the Bible, although not mentioned specifically.

There are three major varieties of Sorrel (Rumex):  broad-leaf (arrow head shaped leaf) (Rumex acetosa), French (Rumex scutatus), and red-veined sorrel (Rumex sanguineus var. sanguineus).  All have tastes that range from tangy / sour to bitter and are a lovely green for salads or cooking.  Most of the flavor comes from Oxalic Acid, also found in spinach and like spinach, should not be consumed in large quantities (People with arthritis or kidney stones should eat minimal amounts of sorrel because the high oxalic acid content can aggravate those conditions.).  I love the lemony flavor of my sorrel.  It is great in salads and cooking for the extra zip it gives.  Before the introduction of lemons in the Middle Ages, sorrel was used in cooking and to prevent scurvy due to its high Vitamin C content.

Plant:
I grow the Broad-Leaf and it is a wonderful herb in the garden, usually producing year-round, and will thrive for several years.

Growing certain types of greens in the desert garden can be challenging and most people who have grown sorrel have not had luck with it growing through the summer.  I found an afternoon shaded spot worked well to keep me in sorrel year-round. The growth is far more vigorous in the winter, but still produces enough during the summer for occasional use. (Pictured, the birds never paid any attention to the plant until I temporarily potted it to move it!)
Baker Creek has 3 types of sorrel seed for sale -- http://www.rareseeds.com/search/?F_Keyword=sorrel

This Recipe for A Chocolate Dreidel was too cute to pass up, even though not quite in the theme.
http://www.marthastewart.com/318045/edible-chocolate-marshmallow-dreidels
More recipe ideas for using sorrel.

Have a wonderful time in your garden and kitchen

Disclaimer: Clicking on links on this blog may earn me a small commission if you purchase something. Your price does not change.
Posted by Catherine, The Herb Lady at 6:51 AM No comments: Links to this post