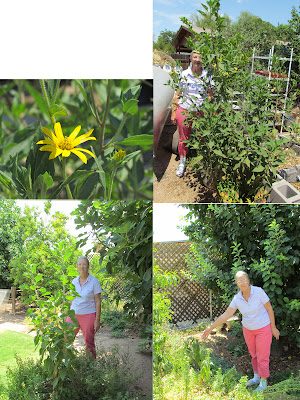 Those of you have followed my writings and experimenting in the garden for a while, know I 'trial' things new to me to determine where they do best.  When I eat something for the first time and really like it, I decide if I want to try to grow it -- so this spring's experiment is Jerusalem Artichokes aka sunchoke, earth apple and other regional nicknames.  Helianthus tuberosus is a member of the aster family which includes sunflowers, and this is one of its happiest family members in the garden, I'm finding, but it has some preferences.

Reports of people growing sunchokes is that they are very invasive, so I decided to trial them in several locations where I could keep an eye on that factor.  My plan is to harvest them in late summer or early fall.

In the picture I have arranged so you can see from great response to not so great.  First is the flower which opened up on the tallest plant, which is the next picture.  The plant is in a pot on the south side of my gardens and is pretty much in full sun until about 5 p.m. or so right now (July 1st) - the plant is a good 6 and half feet tall and is watered on a timer every 2 days for 10 minutes - slow release head.

The next picture on the bottom left of the collage is the planting in what we refer to as our meadow garden.  This garden is in a forest of plants with only a north exposure this time of year and is watered every 5 days - about 20 minutes with spigot type heads in the whole garden area.  The plants are about 6 feet tall.

The last pictured sad looking sunchokes are in full sun all day in a tree well system which has been getting watered every 7 days (now just reduced to 6) and is the middle of a parsley/Greek oregano patch.  They are drooping when the picture was taken because they were right at the end of their maximum stress point for drying and the system had only just come on (6th day).  This patch of sunchokes wilted every afternoon from about day 4 on until the day it got watered.  When I first put the tubers in at this location, I added water half way through the cycle to ensure initially that it had sufficient water to sprout.

At the beginning of the new year I got interested in sunchokes.  I was reading more about their health benefits (fiber not charbohydrates etc.) and found some for sale at Whole Foods.  Up until this point I had never tasted them.  I really enjoyed them raw, so with options for preparation I decided to plant many of the remaining tubers.  I was also pleased that they 'held' in my crisper for several weeks after purchase.  This is important for 'harvest-what-do-you-do-now' aspect.

Like most sunflower family members they like the sun and can take all you can give them, if you provide them with adequate water.  Despite the constraints of the pot - that plant is much bigger than either of the other locations so the conclusion is full sun and watering that does not have the soil completely dried out before watering again.  Pot watering was every 3 days going into spring and changed to every 2 when the temps stayed in the 100+ range.

The meadow garden sunchokes would be taller and happier if they had more complete and direct sun.  The 5 day watering cycle appears to be good for them as they never wilt.

The poor tubers in the parsley bed are stressed to the max with my choice to see if they will grow and produce with far less water.  It remains to be seen what kind of production I will get from that bed.

I will post when it looks like time to harvest. From what I can determine at this point they can be planted in Spring and fall for potential harvest twice a year.  If they are productive that will be a good crop to have for us and for some to be sold at the Farmers Market :-)