We have just come out of what is probably a recorder breaker for killing frost days in the valley of the sun.  Some interesting statistics to look at but first look at our orange tree! 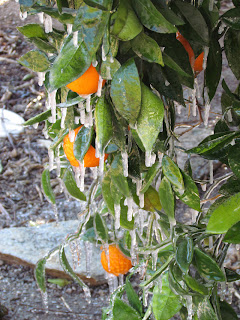 The icicles formed almost immediately when the sprinklers came on the morning of the 2nd, with the air temperatures still below 30.  We saw the sprinklers come on, did not give it a complete second thought until Deane suddenly noticed all the 'white' floating through the air - the water was freezing immediately after exiting the watering head. By the time the system shut off we had a winter wonderland everywhere the sprinkler water hit.

So this leads me to an illustrative discussion of the difference between frost and freeze or "soft" frost vs. "hard" or killing frost.

When we have "soft" frost or temperatures which do not breach below the 32 degree mark a simple cloth cover, garden cloche or simply moving potted plants under something like the edge of trees or your patio is sufficient to protect all but the most tropical of plants because the damage is limited to vertical drop areas, i.e. only those exposed to chilly moist overhead air.

A "hard" or "killing" frost / freeze creates air temperatures so cold it moves horizontally and covering or simply moving them to patios is not sufficient to protect them.  They need air warmer than 32 degrees to avoid damage.  A frost/freeze is considered hard or killing when the below 32 degree temperature exceeds 4 hours.

As I checked temperatures on the evenings of the below 30s nights last week, the temperatures at 7:30 or 8 p.m. were already in the mid to low 30s, not a good sign.  We can presume that the sustained below 30 temperatures lasted from at least late evening until approximately 9 or 10 a.m. the next morning depending on your elevation and proximity to city centers (the heat island affect produced by large amounts of concrete / asphalt pavement and structures which act as heat sinks retaining more heat -- also the reason why city centers in the valley are hotter in the summer).

Our ground actually froze in places during this freeze event.  Any area which was generally shaded most of the day (north of the trees) stayed frozen or the ice did not thaw for 3 days.

* I make a note of these two temperature days because while they were above 32, depending on your garden zones -- most residential and commercial properties have zones, a result either of changes in elevation or just location vis-a-vis large plantings or structures.  I have registered 35 on my high/low gauge and come out to find frost on the lawn some winter days.  Some of this has a lot to do with how high the humidity is, but also that some parts of our property are just cooler than others.

I mention this because as I have written about on a regular basis for years, if the overnight temperature is forecast at 40 or lower, you should protect your sensitive plants with cloth covers or move potted ones under trees or the patio cover, since the temperature can drop as much as 8 degrees from about 11 p.m. to dawn the next morning.

By the way our location generally runs about 4-8 degrees cooler than the official Sky Harbor readings, and during this freeze we generally were 8 degrees cooler.  Brrrrrrr. (I am no longer tolerant of this kind of cold.)

DO - NOT - TOUCH - Frost damaged plants, yet.  In the first freeze in January my peacock geranium was hit hard, but there was green growth at the base.  With this last freeze, more of the plant was damaged, but there is a tiny bit of green still at the base.

If you are wise and do not touch your frost damaged plants until the end of this month, you have a greater chance of keeping the plant alive.  Beginning in the first week of March you can gradually begin to take off the damage - I like to work in a circle removing about a 5th of the damage at a time, gradually exposing the underneath to the sun.

Our Citrus trees sustained damage, but at the moment the damaged appears to be minor.  Deane is more worried about the peach and apricot trees which had started to bud out just before the freeze and this kind of hard cold can kill the flowers which in turn reduces the amount of fruit later.

Again, he will not look at pruning damage from the trees until the end of the month or later.

Twice now our nasturtiums took hits from freezes with most of the plants turning to mush.  The larger ones regenerated from the base after January's freeze, waiting to see if that happens this time.

My racks of seedlings got hit hard, so I have re-started more plants and some of the first settings appear to be coming back.

The strawberries, pansies and garlic appear to be okay.  The sorrel took a hit as did the catnip but do not appear to have been compromised.  Sugar cane took hits but they come back quickly, as does the lemon grass which looks like last years grass at this point.

My three scented geraniums, Peacock, rose attar and chocolate mint all took very hard hits but there is green growth at the bases so I am hopeful.

My Mexican Oregano and Lemon Verbena were hit very hard by the January frost damaging, respectively, about 5 feet and 3 feet of top growth.  This last freeze has damaged even more.  As they are over 5 years old I am hoping the root structure is sufficiently strong enough that I won't lose them - two of my very favorite herbs.

So I will see what the garden holds for us over the next 3-4 weeks in return growth or 'oh well' need to replant issues.

Have a great week,

My Lantanas look DEAD, no green anywhere. Do you think they can come back? especially as we have another frost later this week. My Jacarandas have a ton of damage also. I am going to let them alone for a month or so, but I'm afraid they won't come back and I will have a dead spot until fall.

Hi, My recommendation is to definitely wait until early March before making any judgment calls on the plants. There is also a possibility of frost around the 20/21 if that forecast model holds true (it follows a probably cold rain). Lantanas are hardy to the point of being obnoxious, and the jacarandas, which I do not have a lot of experience with - but are known to be semi deciduous, so again I would wait until early March before removing any damage. The living parts of both plants will be evident when spring weather warms the soil and air, and make it clear where you need to remove the dead material.