Eggplant -- Why it is called 'egg'-plant.

Our eggplant is a little over 4 feet tall at its' tallest right now, and putting out lots of fruit and lovely, but toxic, flowers. 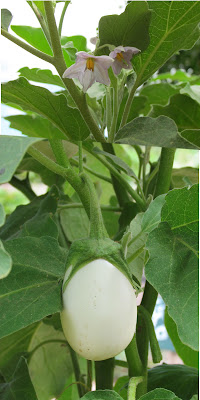 So why is it called eggplant -- the picture shows the whole story -- white, shaped like an egg :-)  The British call eggplant aubergine, a name derived from a Catalan word for the plant by way of France.

Eggplant is a member of the Solanaceae (nightshade) family which also gives us tomatoes, potatoes, peppers, tomatillos and ground cherries.  All of the fruit of these plants are edible, including the seeds, but the entire rest of the plant is toxic/poisonous because of the alkaloid Solanine.

Solanine is also the element that gives the green cast to potatoes exposed to sunlight during the growing time and cannot be cooked out, which is why it is recommended to toss (or save to plant later) any potatoes showing more than a minute amount of green.

Back to eggplant.  Many people are familiar with the native of the India subcontinent and has been cultivated since pre-history (according to wikipedia).  Most American know the large purple variety, particularly used in Italian cooking.

The varieties now becoming better known are the white, plus wonderful green, lilac or lavender, blush and stripped versions, along with physical forms that are long and slender or round and ribbed.


In the valley eggplant like the rest of the family are tender perennials and can grow for multiple years if we do not get a hard frost/freeze (we have had 2 in the last 3 years).  You can protect the plant over winter by mounding leaves completely over the plant or at least 12 - 18 inches up the base.  Chicken wire will keep the leaves in, an additional towel over the top on freezing nights will help.  (I was able to keep a tomato and sweet bell pepper alive this past winter freeze by doing this - it worked where other types of just-covering did not.)


The primary reason for keeping the plant alive during the winter, since they produce no useable fruit, is to have a larger root base going into spring and the plants have a jump-start on growth.  They like the heat and respond accordingly.


Unlike tomatoes which stop producing in the middle of the summer (restarting again in late summer when the night time temperatures fall back below 80), eggplant (and peppers) will continue to produce all summer long and into first frost.


The idea is to layer grilled eggplant and peppers with fresh basil leaves alternating layers with cheese, starting and ending with cheese between the bread slices.

Eggplants sliced and brushed with olive oil
Sweet bell pepper cored and either halved or quartered depending on how big they are
Optional:  Hot pepper if you want some heat
Fresh basil leaves
Cheese of choice, sliced - American, provolone, mozzarella, gruyere or whatever one you like
2 pieces of bread for each person


Have the sliced cheese and rinsed basil leaves ready.
Grill the eggplant and peppers until done, with some bit of charring for flavor.
Toast the bread.

Posted by Catherine, The Herb Lady at 7:34 AM