I just had to share this with you.  Random Acts of Culture is a project of Knights Arts, in what are known as "flash events" apparently spontaneous, but structured gatherings in public places.


This one is thoroughly enjoyable.  A random performance of Hallelujah Chorus from Handel's "Messiah"  With the world's largest pipe organ in Macy's Department Store in Philadelphia.

Yes! We have some bananas! 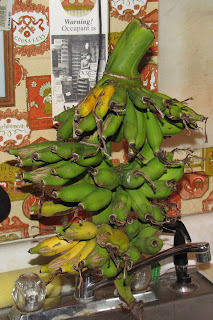 Well after many lost opportunities - we missed some ripening times when we were out of town, or the fruit simply was not mature enough when frosts hit, we have our special banana fruit!

On Wednesday the 3rd we noticed some of the fruit beginning to yellow and cut the whole stalk on Thursday - (we thought - although yesterday Deane noticed there is still a large 'hand' of fruit on the plant which we will leave there until it begins to yellow).

We have been enjoying the ripening fruit ever since.


This is a "Blue Java" or "Ice Cream" banana (Musa acuminata ss. Java Blue( Moo-suh)(ah-kew-min-AH-tuh) is reported to be the best tasting banana and to have a vanilla ice cream taste.

I purchased the original plant about 8 or 9 years ago at a Home Depot in town, and transported the potted plant around until about 2 years ago and then waited, and waited - the first bunch a year ago came out so late we cut the stalk at first frost to keep it going and it did ripen in our back room but the fruit while banana like in flavor was not inspiring.

Over the next year or so we had the hit or miss with subsequent bunches until this one.  It took right at 4 months to go from first flower sighting to this pre-ripe stage.

So was it worth the wait - yep!

First let me tell you these are not large bananas - they average about 3 inches long.  4 of us did the first taste tests - we all agree the flavor is more pronounced than the store bought kind, sweeter, creamy, and with 'something' additional in the flavor.  1 of us said "vanilla"

So it was worth it.

Okay on what some of the challenges were that I can discuss now.  That first year's bunch was off the first plant which grew to about 10 feet tall.  Subsequent plants were taller.  When they would get really going in the warm weather they would put out a new leaf about every 8-10 days.  It appeared the subsequent fruit bunches even when not robust were larger and more 'hands' developed.

Over the last two years I identified some important aspects of growing them here in the valley:

1) the large root mass grows substantially once you put it in the ground from a potted plant.  Subsequent plants are more robust and put out fruit earlier - most likely because of the enlarging root mass.

2) your success with the fruit is going depend a lot on when the flower comes out after the plant has been in the ground about a year, meaning after the initial plant is in the ground a year, the subsequent 'baby' plants will be more robust, grow faster and reach flowering stage a little sooner.  If the fruit in optimal growing time takes 4 months to go from first flower sighting to ready to harvest the stalk then your prime crop will be available before first frost.

-- we have our last large bunch on another plant (each plant produces one bunch then dies back and you need to cut it out) is just now getting go good size and unfortunately needs another 2 months to get to prime harvest state.  We will watch and cut it at first frost.

-- in a very cold winter your banana plants may go to the ground if we get sustained killing frosts (not common) but they will come back up as soon as the soil warms in the spring, even sooner if the subsequent winter is mild.

3) bananas are a large piece of grass - kind of - creating photosynthesis from all green parts.  One of the complaints of 'orderly gardeners' is that the wind can shred the large leaves and it does, but do not cut any of the leaves off unless they have gone completely brown. If you need to contain it some you can cut the bent-over tips some to keep them from trailing on the ground.

4) they will require a bit more water than some other fruiting kinds, but not excessively.  During the hottest part of the summer we watered for about 10 minutes between the same kind of watering we gave our tomatoes, other fruit trees and herbs.

Recommendations from other banana growers are to try and keep no more than a few plants in the same area (root mass) at a time, to encourage good growth and fruiting.  I don't know that my cutting out some of the baby plants for re-sale did any of that but the remaining plants were very large in girth.  I did need to keep the babies cut out anyway so I could control how wide the spread of the mass was by selectively choosing which baby plants came out.  Worked for us.

Other useable qualities of the banana plant are the leaves and flowers are edible.  While you don't want to chow down on the leaf they make great steaming envelopes for food, imparting a fruity quality to the cooked food.  The banana flowers are also edible but I have not wanted to sacrifice future fruit by trying some of the recipes. Now that I know how good the fruit is when it ripens at the right time, if a flower comes out too late for successful fruit production I will give the recipes for banana flower a try -- maybe next year. (If you are really energetic the fibers of the stalks have been used in weaving.)

We were almost considering giving up on the major plant area (I had started another small one to have at least for using the leaves), and we are both glad we didn't pull the plants -- the fruit is that good.

Next I will be updating on my ginger project.

Have a great time in the garden!

http://stores.lulu.com/herbs2u
Posted by Catherine, The Herb Lady at 1:25 PM No comments: Links to this post