I've wanted to do something with barley for a while and I was inspired to try using a bit of Worschestshire sauce while watching a cooking show by Ming Tsai the other day. I prefer using chicken and sausage without any additives. There are several grocers or local suppliers who make sausage without junk. See below for ways to find local suppliers in Arizona and around the country.

1 cup of barley
3 cups of water
pinch of salt

1 1/2 pounds of boneless chicken - cut into 3 inch chunks
1 1/2 pounds of mild Italian sausage
1 white or yellow onion, chopped or sliced in coarse pieces
3 sprigs of fresh rosemary, rinsed
1 small handful of fresh thyme, rinsed (These herbs will be removed after cooking so, tie with string or in a cheese cloth bag for easy removal)
1/4 cup of Worschestshire sauce
2 tablespoons of fresh lemon juice
1 quart of chicken stock
1 cup more or less of water
2 potatoes
2 sweet potatoes (can substitute carrots for some of the potatoes - you want about 3-4 cups of these vegetables)
Olive oil
2 grinds of black pepper
1/4 cup of flour or corn starch

1. Cook barley by bringing water and salt to boil, add barley, stir, cover, reduce heat to simmer and cook for 50 minutes. Set aside after cooking.

In a large stock pot heat oil and add onion, stirring over medium high heat for 1 minute. Add rosemary and thyme, continue stirring for 2 minutes. Add Worschestshire sauce and lemon juice. Stir for 2 more minutes, add pepper, and a bit of chicken stock stir. Begin nesting in chicken and sausage adding broth to keep it covered. Add potatoes last, on top of meat. Add enough broth and water if needed to cover everything. Bring to boil, cover, reduce to gentle simmer, and cook for 30 minutes.

Remove meat and vegetables to a bowl, discard herb bundle. Cool a bit of stock and stir flour into it, then while stirring, add back into stock to thicken. Cook for 3-4 minutes until thick. Cut meat and vegetables into large bit-size pieces. Add reserved barley to stock and bring back to a boil. Add meat and vegetables back in and heat for 2 minutes. Serve and enjoy. This hearty stew usually needs no additional salt.

My mother cooked with barley frequently to extend the nutrition of soups. An old grain, barley is more nutrient dense than brown rice (higher fiber of the good kind). While it takes a little longer to cook, it is worth while to cook up several cups at a time and freeze in 1-2 cup packages for easy additions to soups and stews or to make a variation on fried rice. One nice thing about cooked barley is that it does not have the extra-gelatinous starch rice does.

GARDENING: My e-reminder service is applicable to areas other than the Phoenix Metro valley, including some other states. Click here to find cities whose gardeners can use the same planting and growing help.

In Arizona go to http://www.localfirstaz.com/index.php to find local producers and sellers of not only food but everything your need .

All over the country, you can also find local farmers and producers of all types of foods at localharvest.org

And in Arizona you can find farmers markets at foodconnect.org - foodconnect.org also helps the community with the guiding principle of their mission statement "...to grow strong communities, healthy food, healthy families and healthy farms."


Have a great day,

I'm been wanting savory oatmeal again! And stuffing, so of course I married the two and came up with a recipe that is good for you and simple to make.

Oatmeal is not just for breakfast!

I love stuffing! Some folks call the poultry seasoning, onion, bread mix, dressing. Whatever you call it, it tastes good and the sage and other herbs in the typical seasoning are digestive aids.

When I made some stuffing and roasted chicken the other day I decided to make another version of my Savory Oatmeal.

My mother before me, and my sister and I, like simple stuffing most of the time. Chopped onions and celery in butter and poultry seasoning, add dried bread cubes and chicken broth and we are good to go. Occasionally I will add some sausage to it.

*For you vegetarians, see notes for options - just as good tasting and good for you.

This came out so close to the regular stuffing taste, I'm going to make it often. 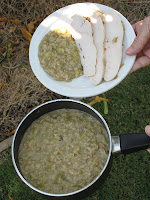 *Vegetarians, you may wish to add about 1 cup of hot, precooked edamame to this oatmeal to make it a complete lunch or dinner item. Fold in after oatmeal is cooked and serve.

In a sauce pan stir poultry seasoning and salt into broth and start on flame. Stir in celery onion mixture and oats, bring to boil, reduce heat to gently bubbling, cook for 5 minutes, stirring frequently. Serve as a side dish to any lunch or dinner. 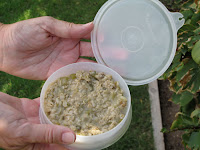 ftovers, if any, make great patties for breakfast the next morning. (I like to use my tupperware hamburger press for these, spray lightly with oil, press in about a 1/2 cup more or less of savory oatmeal, refrigerate overnight - use up within 3-4 days.) When ready to eat, heat pan with a bit of spray or oil, and cook patties on medium heat flipping gently so each side ge 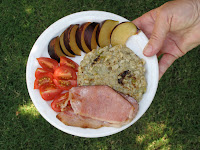 ts 2 times on the pan - you are just heating through and gently crisping the outsides. Most of the time I try to serve 2 fruit and vegetables with each meal - that is sliced plum and cherry tomatoes with the English bacon and the oatmeal-stuffing patty.

**Stuffing is the one time I always throw fat concerns out the window, but you can make this with a 50/50 blend of butter and olive oil - just as tasty.
1 stick of unsalted butter (bread and broth usually provide all the salt you need, plus celery has properties which make food taste saltier)
2 cups of finely chopped celery
2 cups of finely chopped white or yellow onion
1- 2 tablespoons of poultry seasoning
8 cups of bread, cubed and dried (I will sometimes do this the night before and lay them out on a cookie sheet in the cold oven to dry)
2 more tablespoons of poultry season.
Chicken or turkey stock - or Vegetable Broth*

Melt the butter, add the seasoning, stir to mix add celery and onion and cook until translucent and soft, about 20 minutes. Hold out the 1/2 cup of celery and onion for the oatmeal. In a large enough bowl to allow mixing, pour celery onion mixture over bread cubes, add about 1 cup of broth, all of the 2 tablespoons of poultry seasoning and toss, adding more broth to completely moisten the bread. It should be well moistened, but not necessarily soggy unless your prefer and more pudding like stuffing.

A simple way to do a fast dinner of stuffing and chicken is to take a casserole dish, butter or spray the dish, layer in half of the stuffing, top with chicken pieces, with or without bone and skin, sprinkle chicken lightly with a bit more poultry seasoning and top with remaining stuffing - cook for about 1 hour at 325 to 350 degrees. Covering the chicken with the stuffing keeps it moist.

*A really great vegetarian stuffing is made with edamame as the protein addition and if you like a sweet stuffing, add the cranberries.

My Pumpkin Stuffing Recipe
(form "101+ Recipes from The Herb Lady")

You can either do this entire stuffing in a sprayed casserole dish or as a stuffing in a pumpkin or other squash. By itself, cook for 30 minutes at 350, or until the top is crusty brown, or stuff a squash or pumpkin and cook until the squash can be easily pierced with a knife.

A final thought about Savory Oatmeal - be creative - anything you can do with rice you can do with oatmeal or barley - both sooooo good for you. And the oatmeal old fashioned oats cook up quickly. 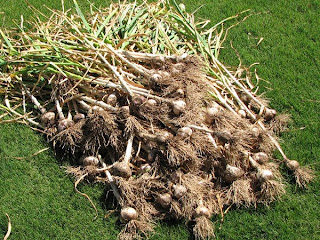 Some of my garlic harvest from last spring is shown in the picture here. I was as excited as a kid in a candy store with the bounty! A pungent candy store to be sure, but the results were amazing. I did blog about it before, but I'm doing so again, because now is the time to prepare to plant garlic. Optimal time is October 1st through November 1st to ensure a sufficient cold potential through the winter here in the desert. While the 6 or so months of growing time seems like a lot of time to spend growing something large and consumed quickly, the efficient use of space makes it worthwhile. Garlic cloves can be planted as close together as 4 inches. In an approximate 17 x 3 foot section of the garden I harvested 124 heads of superior Purple Haze garlic. This year I'm trying out a Russian Porcelain Giant in addition to the Purple Haze - I hope to double my harvest next spring between these two varieties. 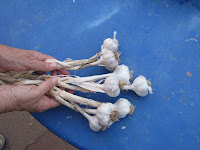 The picture to the right shows some of the garlic rinsed off and braided. Next spring I will go over the harvesting steps. (I used that picture before to show how lovely the garlic looks.)
STEPS to Success with Garlic:
1) The spot you choose must have 4-6 hours of direct sunlight a day, or more.
2) The soil must be organic rich and well draining.
3) Separate a head of garlic into cloves, do not remove paper, discard any that are rotted.
4) Plant pointy end up with 1 inch cover soil (basically 2 inches deep.
5) Water well and as needed - as with other herbs and edibles do not let the soil dry out completely between watering.
6) Keep the garlic bed weed free.

That's it! Plant, water, weed and wait. Now, where to get your planting garlic. You can start with a head of garlic from your local farmers market or grocer. Or you can purchase from my supplier ronnigers.com. Click here to go to their website.

Folks, I may be duplicating this info in several places, but that is because I want you to know how easy it is to grow garlic in your own backyard garden.

Are you sore from gardening, work or just the stress of life? Rolfing may be the answer. Rihab Yaqub, whom I've known for as long as I have been going to the Mesa Farmers Market, is a Certified Rolfer and a great lady. Her focus on life has been self-awareness and living in harmony and it is just a simple pleasure talking with her. Click here for her website and learn more about Rihab and rolfing (And no, as I once read, it is not a mugging you pay for!)

Don't forget to sign up for the discount ($15/year) on my reminder service to greater success in the desert garden -- the discount ends September 30th - still a good deal after that ($21/year), but why not take advantage of an extra good deal. Click here for the payment window. Information on the service here.

Have a great day in the garden,