Cold Weather Moving Out With A Crash and Graupel! 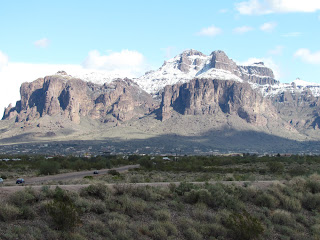 Our last really cold storm (I predict :-) for the winter is finishing up moving through the Valley.  During the night my seedling racks were knocked over by the high winds!  Happily I had moved most of the seedling trays to a shed in anticipation of the windy challenge, but some big pots and recently purchased tomato plants went sliding off, including just sprouted tomatoes, alpine strawberries and eggplant - darn - hoping I have not lost too many.  After the first freeze in early January killed almost 100% of my starts, I re-started everything and here we are again -- oh well, such is the fickle nature of gardening you win some - you lose some. 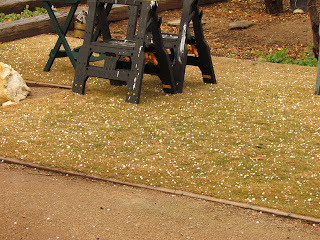 I do like to remind myself that our growing season is so much longer than anywhere else I don't have a right to complain :-)

What is graupel?  A soft hail or snow pellet which shatters when it hits a hard surface - an interesting phenomenon we don't see very often.  Unlike true hail this does not hurt when it hits you, similar to the texture of a snow ball made from new fallen snow, only pea-sized or smaller.

Two pictures we don't see very often in the valley - snow on the Superstition Mountains - by the time I did this blog it was mostly gone.  And while some work is being done in the back yard (e.g. the saw horses) Deane got some good shots of the graupel - while it looks like hail it really is a tiny snow ball.

While I'm predicting an end to potential freezes - that does not mean we might not have an occasional hail storm in March, so have some protection ready in case mother nature throws us another cool one over the plate!

Have a great evening